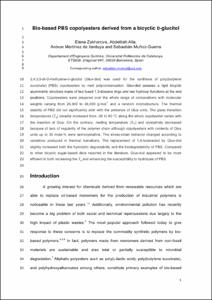 Document typeArticle
Rights accessOpen Access
Abstract
2,4:3,5-di-O-methylene-D-glucitol (Glux-diol) was used for the synthesis of poly(butylene succinate) (PBS) copolyesters by melt polycondensation. Glux-diol possess a rigid bicyclic asymmetric structure made of two fused 1,3-dioxane rings and two hydroxyl functions at the end positions. Copolyesters were prepared over the whole range of compositions with molecular weights varying from 26 000 to 46 000 g mol-1 and a random microstructure. The thermal stability of PBS did not significantly alter with the presence of Glux units. The glass transition temperatures (Tg) steadily increased from -28 to 80 ºC along the whole copolyester series with the insertion of Glux. On the contrary, melting temperature (Tm) and crystallinity decreased because of the lack of regularity of the polymer chain although copolyesters with contents of Glux units up to 30 mole% were semicrystalline. The stress–strain behavior changed according to variations produced in thermal transitions. The replacement of 1,4-butanediol by Glux-diol slightly increased both the hydrolytic degradability and the biodegradability of PBS. Compared to other bicyclic sugar-based diols reported in the literature, Glux-diol appeared to be more efficient in both increasing the Tg and enhancing the susceptibility to hydrolysis of PBS.
CitationZakharova, E., Alla, A., Martinez de Ilarduya, A., Muñoz, S. Bio-based PBS copolyesters derived from a bicyclic D-glucitol. "RSC advances", 12 Maig 2015, vol. 5, núm. 57, p. 46395-46404.
URIhttp://hdl.handle.net/2117/87308
DOI10.1039/C5RA03844H
ISSN2046-2069
Publisher versionhttp://pubs.rsc.org/en/content/articlelanding/2015/ra/c5ra03844h#!divAbstract
Collections
Share: