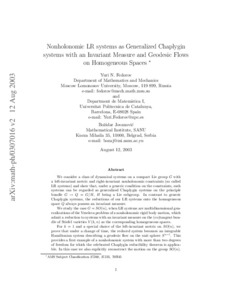 Jovanovic, Bozidar D.
Document typeArticle
Rights accessOpen Access
Abstract
We consider a class of dynamical systems on a compact Lie group G with a left-invariant metric and right-invariant nonholonomic constraints (so called LR systems) and show that, under a generic condition on the constraints, such systems can be regarded as generalized Chaplygin systems on the principle bundle G → Q = G/H, H being a Lie subgroup. In contrast to generic Chaplygin systems, the reductions of our LR systems onto the homogeneous space Q always possess an invariant measure. We study the case G = SO(n), when LR systems are multidimensional generalizations of the Veselova problem of a nonholonomic rigid body motion, which admit a reduction to systems with an invariant measure on the (co)tangent bundle of Stiefel varieties V (k, n) as the corresponding homogeneous spaces. For k = 1 and a special choice of the left-invariant metric on SO(n), we prove that under a change of time, the reduced system becomes an integrable Hamiltonian system describing a geodesic flow on the unit sphere Sn−1. This provides a first example of a nonholonomic system with more than two degrees of freedom for which the celebrated Chaplygin reducibility theorem is applicable. In this case we also explicitly reconstruct the motion on the group SO(n).
URIhttp://hdl.handle.net/2117/873
Collections
Share: