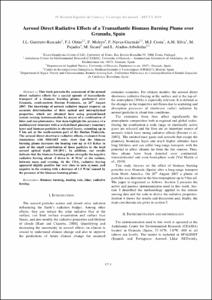 Document typeConference lecture
Rights accessOpen Access
Abstract
This work presents the assessment of the aerosol direct radiative effects for a special episode of transatlantic transport of a biomass burning plume, performed over Granada, south-eastern Iberian Peninsula, on 20th August 2007. The knowledge of aerosol radiative impact requires an accurate determination of their optical and microphysical properties, which are obtained here using ground-based remote sensing instrumentation by means of a combination of lidar and sun-photometer. Our data highlight the presence of a multilayered structure with a well-defined planetary boundary layer and biomass-particles in elevated layers, extending up to 9 km asl, at the south-eastern part of the Iberian Peninsula. The aerosol direct shortwave radiative effects, evaluated from simulations with SBDART code, show that the biomass burning plume increases the heating rate up to 0.5 K/day in spite of the small contribution of these particles to the total aerosol optical depth (10-20%). In addition, our results indicate that the biomass burning plume strengths the negative radiative forcing about -5 down to -8 W/m2 at the surface, between noon and evening. At the TOA, radiative forcing appeared slightly positive but very close to zero at noon, and negative in the evening with a decrease of 1.5 W/m2 caused by the presence of the biomass burning plume.
CitationGuerrero Rascado, J. [et al.]. Aerosol direct radiative effects of a transatlantic biomass burning plume over Granada, Spain. A: IV Reunión Española de Ciencia y Tecnología de Aerosoles. "IV Reunión Española de Ciencia y Tecnología de Aerosoles". 2010, p. 1-7.
URIhttp://hdl.handle.net/2117/8729
Collections
Share: