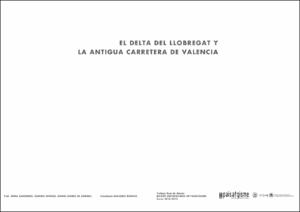 Except where otherwise noted, content on this work is licensed under a Creative Commons license : Attribution-NonCommercial-NoDerivs 3.0 Spain
Abstract
The route of the old road of Valencia matches with the old sea line of the XI century, as evidenced by the archaeological remains of Roman’s beach and boats. The main argument of the project is the nature of “ancient line of the Sea” of this road, cause it had determined its whole history. From the fifties the main industries of aggregate extraction around the Delta concentrate their activities along the Valencia road, thanks to optimal stratigraphic conditions for closeness and presence of gravels. It was during the eighties, and especially in the period 1971-1974, between the closure of the Montjuic Landfill and the opening of the Garraf one, that there was a strong pollution both of water and soil caused by uncontrolled activities related with waste landfill of the big holes left by mining activities. This invisible contamination affects the landscape leaving heavy footprints as the largest abandonment of agricultural plots. A territorial vision about the future of this landscape is suggested through four main themes: 1) The agricultural production: the base structure of this landscape, its matrix, reconstructed with plots of soil phytodepuration; 2) Energy and landscape: as a way to interpret the locus and as a possible paradigm for waste productive landscapes, defining strategies for produce, recycle and save energy; 3) Cultural heritage as a potential activator of the landscape memory and identity, the traces of the ancient sea line as a heritage to be revealed; 4) Visual structure as the tool to understand, to design and to explore a way to “draw atmospheres” and inform the design decisions.
SubjectsLandscape architecture -- Spain -- Llobregat River Delta, Llobregat River Delta (Spain), Sustainable development -- Spain -- Llobregat River Delta, Arquitectura del paisatge -- Catalunya -- Llobregat, Delta del, Llobregat, Delta del (Catalunya), Desenvolupament sostenible -- Catalunya -- Llobregat, Delta del
DegreeMÀSTER UNIVERSITARI EN PAISATGISME (Pla 2015)
Location
1: 08840 Viladecans, Barcelona, Espanya
URIhttp://hdl.handle.net/2117/87281
Collections
Share: