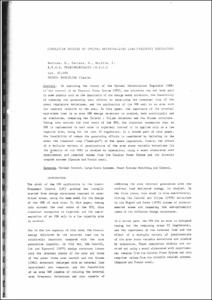 Herranz, J.
Munilla, I.
Document typeConference report
PublisherInternational Federation of Automatic Control (IFAC)
Rights accessOpen Access
Abstract
On appliying the theory of the Optimal Decentralized Regulator (ODR) to the control of an Electric Power System (EPS), due attention has not been paid to some aspects such as the importance of the design model structure, the feasibility of reducing the generating unit efforts by penalizing the transient loop of the speed regulators deviations, and the application of the ODR only to en area with low capacity relative to the pool. In this paper, the importance of the external equivalent load in an area ODR design structure is studied, both analitically and by simulation, comparing the Calovic / Siljak structure and the Hiyama structure. Taking into account the real state of the EPS, the classical assumption that an ODR is implemented in each area is rejected; instead it is applied only in a low capacity area, using for the rest PI regulators. In a second part of this paper, the feasibility of reduce the generating efforts is considered by including in the model the transient loop (
CitationBertran, E., Herranz, J., Munilla, I. Simulation studies of optimal decentralized load-frequency regulators. A: IFAC/IMACS International symposium on simulation of control systems. "IFAC/IMACS 1986: International symposium on simulation of control systems: preprints of the IFAC/IMACS Symposium: Vienna, Austria: 22-26 September 1986". Zurich: International Federation of Automatic Control (IFAC), 1986, p. 202-208.
URIhttp://hdl.handle.net/2117/87275
ISBN0080340849
Collections
Share: