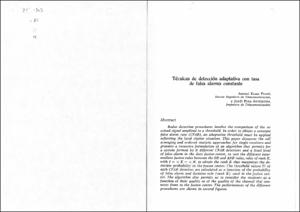 Radar detection procedures involve the comparison of the received signal amplitud to a threshold. In order to obtain a constant false alarm rate (CFAR), an adaptative threshold must be applied reflecting the local clutter situation. This paper discusses the cell averaging and ordered statistic approaches for single receivers and presents a recursive formulation of an algorithm that permits for a system formed by N different CFAR detectors and a fixed level of false alarm in the data fusion center, to test the different intermediate fusion rules between the OR and AND rules, rules of rank K, with 1 = < K = < N, to obtain the rank K that maximizes the detection probability in the fusion center. The threshold values Ti of each CFAR detector, are calculated as a function of the probability of false alarm and decision rule (rank K) used in the fusion center. The algorithm also permits us to consider the receivers as a function of their quality or of the quality of the channel that connects them to the fusion center. The performances of the different procedures are shown in several figures.
CitationElias, A., Puga, J. Técnicas de detección adaptativa con tasa de falsa alarma constante. "Palestra Universitària", 1989, núm. 4, p. 247-303.
URIhttp://hdl.handle.net/2117/87253
ISSN0213-6651