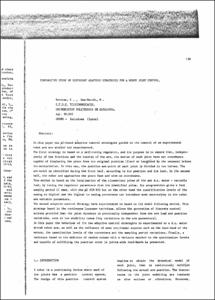 Document typeConference report
Rights accessOpen Access
Abstract
In this paper two mc-based adaptive control strategies guided to the control of an experimental robot arm are studied and experimented. The first strategy is based on a self-tuning regulator, and its purpose is to assure that, independently of the frictions and the inertia of the arm, the motion of each joint have not overshoots capable of displacing the piece from its original position (fixed or localized by the sensors) before its manipulation. In this way, the position set-point of each joint is divided in two halves. The arm model is identified during the first half, according to its position and its load. In the second half, the robot arm approaches the piece fast and with no overshoots. This method is based on the localisation of the closed-loop poles of the set d.c. motor - variable load, by tuning the regulator parameters from the identified poles. Its programation gives a fast samplig period (1 msec. with the mC AIM 65) but on the other hand the quantification levels of the analog to digital and the digital to analog converters can introduce some uncertainty in the robot arm variable parameters. The second adaptive control strategy here experimented is based on the model following method. This strategy based in the continuous Lyapunov technique, allows the generation of discrete control actions provided that the joint dynamics is practically independent from the arm load and position variations, even in low stability cases (big variations in the arm parameters). In this paper the behaviour of the two adaptive control strategies is experimented on a d.c. motor drived robot arm, as well as the influence of some non-linear aspects such as the dead-band of the motors, the quantization levels of the converters and the sampling period variations. Finally, a technique based on the addition of random noises with a variance matched to the quantization levels and capable of nullifying the position error in joints with dead-bands is presented.
CitationBertran, E. Comparative study of different adaptive strategies for a robot joint control. A: International Conference on Intelligent Autonomous Systems. "Intelligent Autonomous Systems: an International Conference held in Amsterdam, the Netherlands, 8-11 December 1986". Amsterdam: 2000, p. 129-141.
URIhttp://hdl.handle.net/2117/87229
ISBN0444701680
Collections
Share: