Dynamic response of a rotating disk submerged and confined. Influence of the axial gap 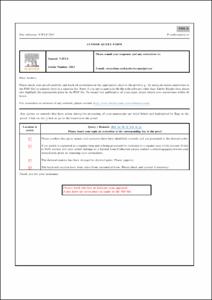 Except where otherwise noted, content on this work is licensed under a Creative Commons license : Attribution-NonCommercial-NoDerivs 3.0 Spain
ProjectANALISIS DE LA INTERACCION FLUIDO-ESTRUCTURA EN PERFILES HIDRAULICOS DE BAJA VORTICIDAD Y SU EFECTO EN LA RESPUESTA DINAMICA DE TURBINAS-BOMBA (MINECO-DPI2012-36264)
Abstract
In this paper, the natural frequencies and mode shapes of a rotating disk submerged and totally confined inside a rigid casing, have been obtained. These have been calculated analytically, numerically and experimentally for different axial gaps disk-casing. A simplified analytical model to analyse the dynamic response of a rotating disk submerged and confined, that has been used and validated in previous researches, is used in this case, generalised for arbitrary axial gaps disk-casing. To use this model, it is necessary to know the averaged rotating speed of the flow with respect to the disk. This parameter is obtained after an analytical discussion of the motion of the flow inside the casing where the disk rotates, and by means of CFD simulations for different axial positions of the disk. The natural frequencies of the rotating disk for the different axial confinements can be calculated following this method. A Finite Element Model has been built up to obtain the natural frequencies by means of computational simulation. The relative velocity of the flow with respect to the disk is also introduced in the simulation model in order to estimate the natural frequencies of the rotating disk. Experimental tests have been performed with a rotating disk test rig. A thin stainless steel disk (thickness of 8 mm, (h/r<5%) and mass of 7.6 kg) rotates inside a rigid casing. The position of the disk can be adjusted at several axial gaps disk-casing. A piezoelectric patch (PZT) attached on the rotating disk is used to excite the structure. Several miniature and submergible accelerometers have measured the response from the rotating frame. Excitation and measured signals are transmitted from the rotating to the stationary frame through a slip ring system. Experimental results are contrasted with the results obtained by the analytical and numerical model. Thereby, the influence of the axial gap disk-casing on the natural frequencies of a rotating disk totally confined and surrounded by a heavy fluid is determined.
CitationPresas, A., Valentin, D., Egusquiza, E., Valero, M., Seidel, U. Dynamic response of a rotating disk submerged and confined. Influence of the axial gap. "Journal of fluids and structures", 01 Abril 2016, vol. 62, p. 332-349.
URIhttp://hdl.handle.net/2117/87181
DOI10.1016/j.jfluidstructs.2016.02.003
ISSN0889-9746
Publisher versionhttp://www.sciencedirect.com/science/article/pii/S0889974616000311
Collections
Share: