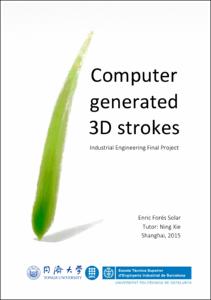 StrokeEbased rendering (SBR) is an approach to creating nonE photorealistic images (NPI) by placing discrete elements called strokes, such as paint strokes or stipples. Several lines of investigation are being followed to obtain software that authomatises this process, both in still and moving images The aim of this present work is to adapt the Computer Generated Images (CGI) part of a common 3D animation pipeline (concatenated processes with which a 3D animation is made, from the concept art and sketches to the final compositing of the scenes) to apply the authomatically generated stroke textures of PHD Ning Xie’s software on the 3D models. Ning Xie’s software generates, given an image and the contour of the desired stroke, a computer generated stroke extracting the colour information from the given image. Originally programmed to emulate sumiEe oriental drawings (traditional style that represent the motive with few strokes) in this work a way will be presented to bring this technology from 2D to 3D. For the purpose of this thesis a simple animation of a bamboo leaf has been created to work on a simple example while developing the process . The main (and original) challenge of this work is writing a python script to extract from blender the desired contours of the strokes in a way that can be used by Ning Xie’s software. It’s important to comment that NPR is nothing near to a science with clear objectives as the results of it only can be evaluated using aestethical criteria. However the tools and technology used to achieve it has a clear and exact definition in which this thesis will work on.
SubjectsImage processing -- Digital techniques, Three-dimensional display systems, Computer animation, Imatges -- Processament -- Tècniques digitals, Visualització tridimensional (Informàtica), Animació per ordinador
ProvenanceAquest document conté originàriament altre material i/o programari no inclòs en aquest lloc web
URIhttp://hdl.handle.net/2117/87144