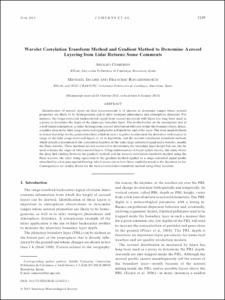 Document typeArticle
PublisherAmerican Meteorological Society
Rights accessOpen Access
European Commission's projectACTRIS - Aerosols, Clouds, and Trace gases Research Infrastructure Network (EC-FP7-262254)
Abstract
Identification of aerosol layers on lidar measurements is of interest to determine ranges where aerosol properties are likely to be homogeneous and to infer transport phenomena and atmosphere dynamics. For instance, the range-corrected backscattered signal from aerosol measured with lidars has long been used as a proxy to determine the depth of the planetary boundary layer. The method relies on the assumption that in a well-mixed atmosphere, a rather homogenous aerosol distribution will exist within the boundary layer; hence, a sudden drop in the lidar range-corrected signal profile will mark the end of the layer. The most usual methods to detect that drop are the gradient method, which detects a negative maximum in the derivative with respect to range of the lidar range-corrected signal, or of its logarithm, and the wavelet correlation transform method, which detects a maximum in the correlation function of the lidar range-corrected signal and a wavelet, usually the Haar wavelet. These methods are not restricted to determining the boundary layer height but can also be used to locate the edges of lofted aerosol layers. Using fundamentals of linear system theory, this study shows the deep link existing between the gradient method and the wavelet correlation transform method using the Haar wavelet, the latter being equivalent to the gradient method applied to a range-corrected signal profile smoothed by a low-pass spatial filtering, which seems not to have been explicitly noted in the literature so far. Consequences are readily drawn for the wavelet correlation transform method using other wavelets.
CitationComeron, A., Sicard, M., Rocadenbosch, F. Wavelet correlation transform method and gradient method to determine aerosol layering from lidar returns: Some comments. "Journal of atmospheric and oceanic technology", Juny 2013, vol. 30, núm. 6, p. 1189-1193.
URIhttp://hdl.handle.net/2117/87070
DOI10.1175/JTECH-D-12-00233.1
ISSN0739-0572
Publisher versionhttp://journals.ametsoc.org/doi/abs/10.1175/JTECH-D-12-00233.1
Collections
Share: