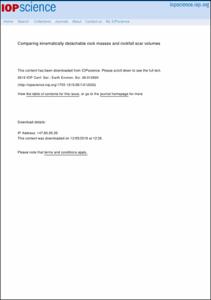 Except where otherwise noted, content on this work is licensed under a Creative Commons license : Attribution 3.0 Spain
Abstract
In rockfall prone areas the evaluation of the risk due to worst case scenarios requires the establishment of maximum thresholds for the expected rockfall volumes. The magnitude of such instabilities is often related to the properties of the jointed rock mass, with the characteristics of the existing unfavorably dipping joint sets playing a major role. The study-site here is the chute of Forat Negre in Andorra. The size distribution of the missing volumes from the scars was calculated using terrestrial laser scanner point cloud data and reaches up to few thousands of m3. On the other hand, the application of Markland criteria on a Digital Elevation Model of the zone indicated the kinematically detachable rock masses to be up to tens of thousands of m3. As the size of the scar areas does not indicate the occurrence of such events in the past, the effect of the joint persistence as assumed for the two analyses is discussed here. The areas of the exposed joint surfaces belonging to each discontinuity set are obtained and their use as a measure of the relative persistence of each set is proposed. The average and median length of the sets F3 and F5 (sliding planes) are found to be similar to the average and median spacing of the intersecting set F7 (tension crack), suggesting that the F7 set exerts a control over the persistence of the former ones.
CitationMavrouli, O., Corominas, J. Comparing kinematically detachable rock masses and rockfall scar volumes. A: International Symposium on Geohazards and Geomechanics. "International Symposium on Geohazards and Geomechanics (ISGG2015), 10–11 September 2015, Warwick, UK". Warwick: Institute of Physics (IOP), 2015, p. 1-11.
URIhttp://hdl.handle.net/2117/87008
DOI10.1088/1755-1315/26/1/012020
Publisher versionhttp://iopscience.iop.org/article/10.1088/1755-1315/26/1/012020/pdf
Collections
Share: