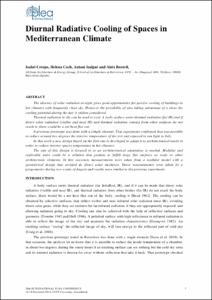 The absence of solar radiation at night gives good opportunities for passive cooling of buildings in hot climates with frequently clear sky. However the possibility of also taking advantage of a clear sky cooling potential during the day is seldom considered. Thermal radiation to sky can be used to cool. A body surface emits thermal radiation (far IR) and if direct solar radiation (visible and near IR) and thermal radiation coming from other surfaces do not reach it, there would be a net heat flux out. A previous prototype was done with a simple element. That experiment confirmed that was possible to reduce around two degrees the interior temperature of the test unit exposed to sun light in July. In this work a new design based on the first one is developed to adapt it to architectonical needs in order to reduce interior spaces temperature in hot climates. The aim of this design is focused to so an architectonical adaptation is needed. Modular and replicable units could be a solution that permits to fulfill large flat surfaces as roofs or other architectonic elements. In this occasion, measurements were taken from a modular model with a geometrical design that avoided de direct solar incidence. These measurements were taken by a pyrgeometer during two weeks of August and results were similar to the previous experiment.
CitationCrespo, I., Coch, H., Isalgue, A., Borrell, A. Diurnal radiative cooling of spaces in Mediterranean climate. A: International PLEA Conference. "30th International PLEA Conference: Sustainable habitat for developing societies: choosing the way forward: December 16-18, 2014: Proceedings". Ahmedabad: CEPT University Press, 2014, p. 286-291.
URIhttp://hdl.handle.net/2117/87007
ISBN978-93-83184-03-3