PPP on Toll Road in Indonesia 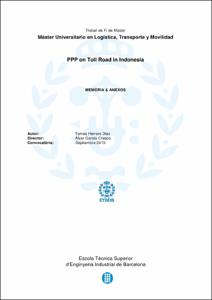 Except where otherwise noted, content on this work is licensed under a Creative Commons license : Attribution-NonCommercial-NoDerivs 3.0 Spain
Abstract
The development of transport infrastructure is critical to boost the economic growth in developing countries. However, transport infrastructure is capital-intensive and public funds are limited. In this context, private sector participation should be encouraged to decrease the burden of the governments in terms of financing. Indonesia is the fourth most populated country in the world and its economy has been steadily growing during the last decade. Nevertheless, the country faces several challenges due to the underdeveloped and irregular distribution of transport infrastructure around the country. The Master Plan for Acceleration and Expansion of Indonesia's Economic Development (MP3EI) includes the construction of thousands of kilometers of roads. PPPs are expected to play an important role in the implementation of this Plan. In this sense, the government holds a proactive approach and as a result, a regulatory framework for PPPs has been established. The main objective of this dissertation is to determine whether toll road projects are economically and financially viable in Indonesia and, consistently define the most suitable financing schemes to be adopted. A Cost Benefit Analysis (CBA) has been conducted in order to assess the economic welfare gain, as well as to conclude whether this projects would be commercially feasible. One of the most attractive sections of the Trans Sumatra toll road, in terms of traffic forecast and initial investment, has been analyzed for this purpose. The relevant economic impacts have been identified, monetized, and discounted using a certain social discount rate to determine the economic performance. Moreover, all the financial outflows and inflows have been calculated and discounted using a certain financial discount rate to establish the cash flow streams. The economic and financial indicators obtained show that even toll roads socio-economically desirable are financially unfeasible. Hence, mixed financing schemes have been proposed including public incentives to attract private investors. A Build-Operate-Transfer (BOT) agreement between public and private parties is considered the more appropriate model to develop toll roads in Indonesia. It is essential to identify the risks related to the project; paying special attention to which party – the public or the private sector – will be mainly responsible for the planning and implementation of the mitigation measures and the management of such risks. Several financing schemes with different initial investment distributions, responsibilities, and risk allocations have been proposed. The conclusion drawn is that major initial investment covered by the private or public party implies greater financial profitability for the private party and smaller incurred cost for the public party respectively. However, it should be considered that more responsibility and financial risk will be assumed too. Based on the proposed schemes, the development of toll roads in Indonesia would be commercially viable under BOT financing schemes sharing the initial investment between public and private parties and establishing shadow tolls. An agreement regarding the portion of initial investment covered by each party and the shadow tolls compensation should be clearly defined in the PPP contract.
SubjectsComputer network protocols, Transportation -- Indonesia, Protocols de xarxes d'ordinadors, Transport -- Indonèsia
DegreeMÀSTER UNIVERSITARI EN LOGÍSTICA, TRANSPORT I MOBILITAT (Pla 2009)
Location
1: South Jakarta, South Jakarta City, Special Capital Region of Jakarta, Indonèsia
URIhttp://hdl.handle.net/2117/86996
Collections
Share: