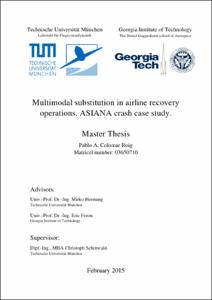 The Master Thesis "Multi-modal substitution in airline recovery operations. ASIANA crash case study" offers a detailed view of the consequences of ASIANA crash in the network, and proposes the implementation of an inter-modal rerouting of the diverted passangers in order to enhance a faster and cost-effective recovery from the disruption. The thesis is introduced by a description of the research project in which this study is circumscribed, as well as the data sources. Then, Chapter 2 presents the ASIANA crash factual summary, along with the impact of the crash in the schedules during the following days. Chapter 3 shows an estimated cost evaluation of the crash impact on schedules, followed by the argumentation in Chapter 4 of the research motivations. Once the research focus is narrowed, Chapter 5 discusses in detail all the issues related to the implementation of inter-modal operations in the airline industry. The chapter starts explaining the state-of-the-art of inter-modal operations in the airline industry, then assesses the two possibilities of implementation of an intermodal rerouting to SFO, and finally discusses secondary aspects of inter-modal operations, such as safety issues, motor-coaches service handling or how passengers may respond to an inter-modal rerouting. After discussing how an inter-modal rerouting should be operated for ASIANA crash case, Chapter 6 offers a mathematical model to optimise the rerouting costs by applying inter-modal substitution of diverted flights, and Chapter 7 shows the model implementation over the busiest airports involved in the diversions triggered by Asiana Crash, computing the results and comparing them to non-inter-modal reroutings. The thesis is closed extracting the conclusions of the implementations, and offering possibilities for further research in this field.
SubjectsAeronautics, Commercial, Aviació comercial
URIhttp://hdl.handle.net/2117/86989