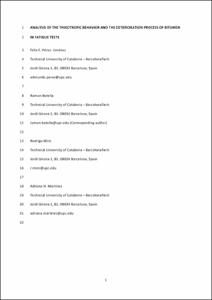 Document typeArticle
Rights accessOpen Access
Abstract
The characterization of fatigue damage on bituminous materials under cyclic loading has been classically studied using tests and procedures previously developed for the characterization of metallic materials. However, these materials present important differences in their behavior in cyclic testing. For instance, the significant loss of modulus the bitumen exhibits at early stages of the test or its total recovery when loading is removed.; Comparison between two types of cyclic testing applied to bitumens, time and strain sweep tests has proven that this phenomenon is related with the nonlinear behavior of the bitumen, thixotropy and viscoelasticity, and that the amount of modulus loss during the initial part of cyclic testing is directly related to the strain applied.; Using the framework of the work potential theory, a new expression has been found for the damage law that describes the loss of modulus of bitumens during the linear phase of the fatigue tests. Additionally, a procedure is proposed to estimate the fatigue relation between the strain applied and the number of cycles to failure using only the data obtained in strain sweep tests. These relations fit reasonably well the experimental data obtained in more time consuming time sweep tests.; Applying this estimation procedure implies a great time savings in the characterization of the fatigue behavior of asphalt binders and the determination of their fatigue laws.
CitationPerez, F., Botella, R., Miro, R., Martinez, A. Analysis of the thixotropic behavior and the deterioration process of bitumen in fatigue tests. "Construction & building materials", Desembre 2015, vol. 101, núm. Part 1, p. 277-286.
URIhttp://hdl.handle.net/2117/86928
DOI10.1016/j.conbuildmat.2015.10.113
ISSN0950-0618
Collections
Share: