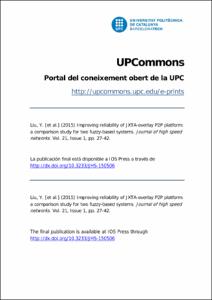 Document typeArticle
Rights accessOpen Access
Abstract
In P2P systems, each peer has to obtain information of other peers and propagate the information to other peers through neighboring peers. Thus, it is important for each peer to have some number of neighbor peers. Moreover, it is more significant to discuss if each peer has reliable neighbor peers. In reality, each peer might be faulty or might send obsolete, even incorrect information to the other peers. We have implemented a P2P platform called JXTA-Overlay, which defines a set of protocols that standardize how different devices may communicate and collaborate among them. It abstracts a new layer on the top of JXTA through a set of primitive operations and services that are commonly used in JXTA-based applications and provides a set of primitives that can be used by other applications, which will be built on top of the overlay, with complete independence. JXTA-Overlay provides a set of basic functionalities, primitives, intended to be as complete as possible to satisfy the needs of most JXTA-based applications. In this paper, we present two fuzzy-based systems (called FRS1 and FRS2) to improve the reliability of JXTA-Overlay P2P platform. We make a comparison study between the fuzzy-based reliability systems. Comparing the complexity of FRS1 and FRS2, the FRS2 is more complex than FRS1. However, it considers also the security; therefore, it can be used in real application for secure systems.
Description
The final publication is available at IOS Press through http://dx.doi.org/10.3233/JHS-150506
CitationLiu, Y., Sakamoto, S., Matsuo, K., Ikeda, M., Barolli, L., Xhafa, F. Improving reliability of JXTA-overlay P2P platform: a comparison study for two fuzzy-based systems. "Journal of high speed networks", 2015, vol. 21, núm. 1, p. 27-42.
URIhttp://hdl.handle.net/2117/86879
DOI10.3233/JHS-150506
ISSN0926-6801
Publisher versionhttp://content.iospress.com/articles/journal-of-high-speed-networks/jhs506
Collections
Share: