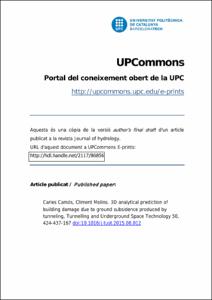 Tunnel construction entails the generation of ground settlements, which can endanger the adjacent buildings. The prediction of damages in buildings is usually based on the classical Gaussian profiles for the approximation of the subsidence trough and the equivalent beam method for modeling the response of building walls. Current available expressions refer to walls aligned transversally with respect to the tunnel axis, which usually represents the worst-case scenario. However, approximations must be done for other building alignments, since no analytical expressions are available for these cases. We propose a novel equation for the determination of the horizontal ground strain, which departs from the equations of the classical Gaussian settlement profiles. The novel formulation allows the application of the equivalent beam method in 3D and the modeling of the tunnel advance. The results show significant variations of the estimated damage depending on the wall position with respect to the tunnel axis. The paper reviews also certain relevant aspects of building damage predictions, such as the influence area of settlements and the possible contribution of ground horizontal strain to damage reduction. A parametric analysis is further performed to create a non-linear regression model that allows direct estimation of the maximum tensile strain in a building wall according to input values of geological conditions and wall and tunnel geometries.
CitationCamós, C., Molins, C. 3D analytical prediction of building damage due to ground subsidence produced by tunneling. "Tunnelling and underground space technology", Agost 2015, vol. 50, p. 424-437.
URIhttp://hdl.handle.net/2117/86856
DOI10.1016/j.tust.2015.08.012
ISSN0886-7798
Publisher versionhttp://www.sciencedirect.com/science/article/pii/S0886779815300444