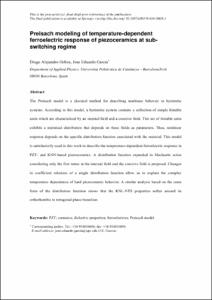 The Preisach model is a classical method for describing nonlinear behavior in hysteretic systems. According to this model, a hysteretic system contains a collection of simple bistable units which are characterized by an internal field and a coercive field. This set of bistable units exhibits a statistical distribution that depends on these fields as parameters. Thus, nonlinear response depends on the specific distribution function associated with the material. This model is satisfactorily used in this work to describe the temperature-dependent ferroelectric response in PZT- and KNN-based piezoceramics. A distribution function expanded in Maclaurin series considering only the first terms in the internal field and the coercive field is proposed. Changes in coefficient relations of a single distribution function allow us to explain the complex temperature dependence of hard piezoceramic behavior. A similar analysis based on the same form of the distribution function shows that the KNL–NTS properties soften around its orthorhombic to tetragonal phase transition.
CitationOchoa, D. A., Garcia, J. E. Preisach modeling of temperature-dependent ferroelectric response of piezoceramics at sub-switching regime. "Applied physics A. Materials science and processing", Abril 2016, vol. 122.
URIhttp://hdl.handle.net/2117/86800
DOI10.1007/s00339-016-9808-1
ISSN0947-8396
Publisher versionhttp://link.springer.com/article/10.1007%2Fs00339-016-9808-1