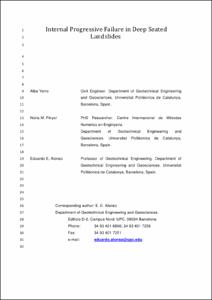 Document typeArticle
Rights accessOpen Access
Abstract
Except for simple sliding motions, the stability of a slope does not depend only on the resistance of the basal failure surface. It is affected by the internal distortion of the moving mass, which plays an important role on the stability and post-failure behaviour of a landslide. The paper examines the stability conditions and the post-failure behaviour of a compound landslide whose geometry is inspired by one of the representative cross-sections of Vajont landslide. The brittleness of the mobilized rock mass was described by a strain-softening Mohr–Coulomb model, whose parameters were derived from previous contributions. The analysis was performed by means of a MPM computer code, which is capable of modelling the whole instability procedure in a unified calculation. The gravity action has been applied to initialize the stress state. This step mobilizes part of the strength along a shearing band located just above the kink of the basal surface, leading to the formation a kinematically admissible mechanism. The overall instability is triggered by an increase of water level. The increase of pore water pressures reduces the effective stresses within the slope and it leads to a progressive failure mechanism developing along an internal shearing band which controls the stability of the compound slope. The effect of the basal shearing resistance has been analysed during the post-failure stage. If no shearing strength is considered (as predicted by a thermal pressurization analysis), the model predicts a response similar to actual observations, namely a maximum sliding velocity of 25 m/s and a run-out close to 500 m.
CitationYerro, A., Pinyol, N.M., Alonso, E. Internal progressive failure in deep-seated landslides. "Rock mechanics and rock engineering", Novembre 2015.
URIhttp://hdl.handle.net/2117/86758
DOI10.1007/s00603-015-0888-6
ISSN0723-2632
Collections
Share: