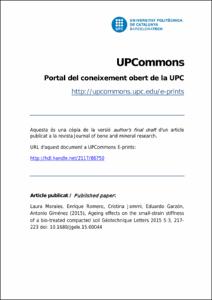 Jommi, Cristina
Garzón Garzón, Eduardo
Giménez, Antonio
Document typeArticle
Rights accessOpen Access
All rights reserved. This work is protected by the corresponding intellectual and industrial property rights. Without prejudice to any existing legal exemptions, reproduction, distribution, public communication or transformation of this work are prohibited without permission of the copyright holder
Abstract
The effect of ageing on the small-strain shear stiffness of compacted silty-clayey sand following a ‘soft’ biological treatment is discussed. Samples were prepared by static compaction, adding urea-degrading bacteria to the compaction water. No nutrients were artificially added, relying on the natural availability of urea and calcium ions (Ca2 +) in the humic soil and in the compaction water for the bacteria to precipitate calcium carbonate. After compaction, to replicate different environmental boundary conditions, some of the samples were cured in a system open to vapour transfer and some were cured in a closed system. The small-strain shear stiffness was periodically tracked with bender elements during the ageing period. Tests were run in parallel to investigate the unconfined compression strength, the water retention properties and soil pore size distribution changes during ageing. The test results revealed a small but consistent increase in the small-strain shear stiffness during the ageing period due to the microbiological treatment, in both the closed and open systems. In the latter case, the contribution of the microbiological treatment to the increase in stiffness could be estimated after correcting the data for the suction increase due to evaporation.
CitationMorales, L., Romero, E., Jommi, C., Garzón, E., Giménez, A. Ageing effects on the small-strain stiffness of a bio-treated compacted soil. "Géotechnique Letters", Setembre 2015, vol. 5, núm. 3, p. 217-223.
URIhttp://hdl.handle.net/2117/86750
DOI10.1680/geolett.15.00044
ISSN2045-2543
Publisher versionhttp://www.icevirtuallibrary.com/doi/abs/10.1680/jgele.15.00044
Collections
Share: