Nitrate pollution of groundwater; all right. . ., but nothing else? 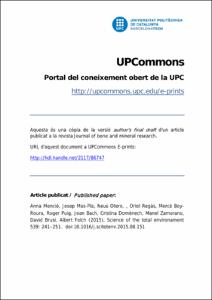 Except where otherwise noted, content on this work is licensed under a Creative Commons license : Attribution-NonCommercial-NoDerivs 3.0 Spain
Abstract
Contamination from agricultural sources and, in particular, nitrate pollution, is one of the main concerns in groundwater management. However, this type of pollution entails the entrance of other substances into the aquifer, as well as it may promote other processes. In this study, we deal with hydrochemical and isotopic analysis of groundwater samples from four distinct zones in Catalonia (NE Spain), which include 5 different aquifer types, to investigate the influence of fertilization on the overall hydrochemical composition of groundwater. Results indicate that intense fertilizer application, causing high nitrate pollution in aquifers, also homogenize the contents of the major dissolved ions (i.e.; Cl-, SO42-, Ca2+, Na+, K+, and Mg2+). Thus, when groundwater in igneous and sedimentary aquifers is compared, significant differences are observed under natural conditions for Cl-, Na+ and Ca2+ (with p-values ranging from <0.001 to 0.038), and when high nitrate concentrations occur, these differences are reduced (most p-values ranged between 0.054 and 0.978). Moreover, positive linear relationships between nitrate and some ions are found indicating the magnitude of the fertilization impact on groundwater hydrochemistry (with R2 values of 0.490, 0.609 and 0.470, for SO42-, Ca2+ and Cl-, respectively). Nevertheless, the increasing concentration of specific ions is not only attributed to agricultural pollution, but to their enhancing effect upon the biogeochemical processes that control water-rock interactions. Such results raise awareness that these processes should be evaluated in advance in order to assess an adequate groundwater resources management.
CitationMenció, A., Mas-Pla, J., Otero, N., Regàs, O., Boy-Roura, M., Puig, R., Bach, J., Domènech, C., Zamorano, M., Brusi, D., Folch, A. Nitrate pollution of groundwater; all right. . ., but nothing else?. "Science of the total environment", 01 Gener 2016, vol. 539, p. 241-251.
URIhttp://hdl.handle.net/2117/86747
DOI10.1016/j.scitotenv.2015.08.151
ISSN0048-9697
Publisher versionhttp://www.sciencedirect.com/science/article/pii/S0048969715306537
Collections
Share: