Comparison of global RHESSI and AGILE TGFs distributions and analysis of all AGILE satellite passes over South America. 2009-2012 period 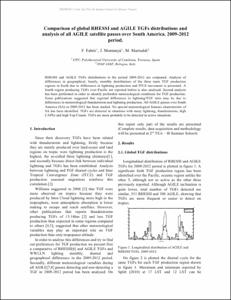 Marisaldi, Martino
Document typeConference report
Rights accessOpen Access
Abstract
RHESSI and AGILE TGFs distributions in the period 2009-2012 are compared. Analysis of differences in geographical, hourly, monthly distributions of the three main TGF production regions in Earth due to differences in lightning production and ITCZ movement is presented. A fourth region producing TGFs over Pacific not reported before is also analysed. Second analysis has been performed in order to identify preferable meteorological conditions for TGF production. Some publications suggested that regional differences in lightning/TGF ratio may be due to differences in meteorological thunderstorm and lightning production. All AGILE passes over South America (SA) in 2009-2012 has been studied. No special meteorological features characteristic of SA has been identified. TGFs are detected in situations with many lightning, thunderstorms, high CAPEs and high Top Clouds. TGFs are more probable to be detected in active situations.
Location
1: Novo Progresso - State of Pará, Brasil
CitationFabro, F., Montaña, J., Marisaldi, M. Comparison of global RHESSI and AGILE TGFs distributions and analysis of all AGILE satellite passes over South America. 2009-2012 period. A: Thunderstorm Effects on the Atmosphere-Ionosphere System. "TEA-IS summer school 2014". Colliure: 2014, p. 1-2.
URIhttp://hdl.handle.net/2117/86743
Collections
Share: