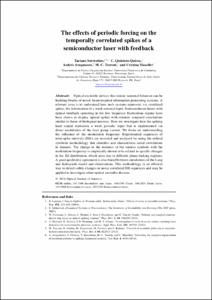 Except where otherwise noted, content on this work is licensed under a Creative Commons license : Attribution-NonCommercial-NoDerivs 3.0 Spain
Abstract
Optical excitable devices that mimic neuronal behavior can be building-blocks of novel, brain-inspired information processing systems. A relevant issue is to understand how such systems represent, via correlated spikes, the information of a weak external input. Semiconductor lasers with optical feedback operating in the low frequency fluctuations regime have been shown to display optical spikes with intrinsic temporal correlations similar to those of biological neurons. Here we investigate how the spiking laser output represents a weak periodic input that is implemented via direct modulation of the laser pump current. We focus on understanding the influence of the modulation frequency. Experimental sequences of inter-spike-intervals (ISIs) are recorded and analyzed by using the ordinal symbolic methodology that identifies and characterizes serial correlations in datasets. The change in the statistics of the various symbols with the modulation frequency is empirically shown to be related to specific changes in the ISI distribution, which arise due to different phase-locking regimes. A good qualitative agreement is also found between simulations of the Lang and Kobayashi model and observations. This methodology is an efficient way to detect subtle changes in noisy correlated ISI sequences and may be applied to investigate other optical excitable devices.
CitationAmaral, T., C. Quintero-Quiroz, Aragoneses, A., Torrent, M.C., Masoller, C. Effects of periodic forcing on the temporally correlated spikes of a semiconductor laser with feedback. "Optics express", 09 Març 2015, vol. 23, núm. 5, p. 5571-5581.
URIhttp://hdl.handle.net/2117/86710
DOI10.1364/OE.23.005571
ISSN1094-4087
Publisher versionhttps://www.osapublishing.org/view_article.cfm?gotourl=https%3A%2F%2Fwww%2Eosapublishing%2Eorg%2FDirectPDFAccess%2F169E09B9-E36C-FDE4-4D0016A858E1F50B_312350%2Foe-23-5-5571%2Epdf%3Fda%3D1%26id%3D312350%26seq%3D0%26mobile%3Dno&org=
Collections
Share: