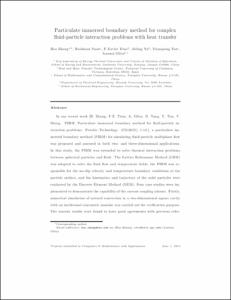 Document typeArticle
Rights accessOpen Access
Abstract
In our recent work (Zhang et al., 2015), a Particulate Immersed Boundary Method (PIBM) for simulating fluid-particle multiphase flow was proposed and assessed in both two- and three-dimensional applications. In this study, the PIBM was extended to solve thermal interaction problems between spherical particles and fluid. The Lattice Boltzmann Method (LBM) was adopted to solve the fluid flow and temperature fields, the PIBM was responsible for the no-slip velocity and temperature boundary conditions at the particle surface, and the kinematics and trajectory of the solid particles were evaluated by the Discrete Element Method (DEM). Four case studies were implemented to demonstrate the capability of the current coupling scheme. Firstly, numerical simulation of natural convection in a two-dimensional square cavity with an isothermal concentric annulus was carried out for verification purpose. The current results were found to have good agreement with previous references. Then, sedimentation of two-and three-dimensional isothermal particles in fluid was numerically studied, respectively. The instantaneous temperature distribution in the cavity was captured. The effect of the thermal buoyancy on particle behaviors was discussed. Finally, sedimentation of three-dimensional thermosensitive particles in fluid was numerically investigated. Our results revealed that the LBM-PIBM-DEM is a promising scheme for the solution of complex fluid-particle interaction problems with heat transfer.
CitationZhang, H., Yuan, H., Trias, F. X., Yu, A., Tan, Y., Oliva, A. Particulate immersed boundary method for complex fluid-particle interaction problems with heat transfer. "Computers & mathematics with applications", 01 Gener 2016, vol. 71, núm. 1, p. 391-407.
URIhttp://hdl.handle.net/2117/86702
DOI10.1016/j.camwa.2015.12.003
ISSN0898-1221
Publisher versionhttp://www.sciencedirect.com/science/article/pii/S0898122115005714
Collections
Share: