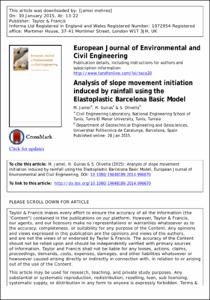 Except where otherwise noted, content on this work is licensed under a Creative Commons license : Attribution-NonCommercial-NoDerivs 3.0 Spain
Abstract
In some arid and semi-arid regions, different types of infrastructure assets suffer from degradation of the roads, the embankment failures, erosion due to cyclic hydraulic actions and the effects of rainfall infiltration on slopes. Typical cases, such as the national roads in the north-west of Tunisia (Beja city) have been affected dramatically. Recent landslide is manifested in this region, especially in a plastic clay soil. Stability problems are caused by soil saturation and the presence of abundant cracks which are developed after a long dry summer. In fact, due to geotechnical problems, the annual loss due to the damage is estimated at $1 million in Beja area (30 km(2)). The effect of rainfall infiltration into the unsaturated clay during wet seasons characterised by either long duration low intensity rain or short duration high intensity rain have been analysed. The elastoplastic Barcelona Basic Model (BBM) has been used and soil movements leading to slope failure were calculated according to the unsaturated state evolution. The effects of cyclic hydraulic paths on the yield function have also been investigated. The yield function evolution depends on the cohesion and the apparent consolidation stress variations. The numerical calculations were evaluated against the field measurement displacements.
CitationJamei, M., Guiras, H., Olivella, S. Analysis of slope movement initiation induced by rainfall using the Elastoplastic Barcelona Basic Model. "European journal of environmental and civil engineering", Octubre 2015, vol. 19, núm. 9, p. 1033-1058.
URIhttp://hdl.handle.net/2117/86701
DOI10.1080/19648189.2014.996670
ISSN1964-8189
Collections
Share: