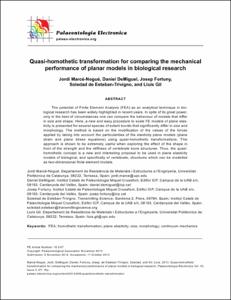 Document typeArticle
Rights accessOpen Access
Abstract
The potential of Finite Element Analysis (FEA) as an analytical technique in biological research has been widely highlighted in recent years. In spite of its great power, only in the best of circumstances one can compare the behaviour of models that differ in size and shape. Here, a new and easy procedure to scale FE models of plane elasticity is presented for several species of extant bovids that significantly differ in size and morphology. The method is based on the modification of the values of the forces applied by taking into account the particularities of the elasticity plane models (plane strain and plane stress equations) using quasi-homothetic transformations. This approach is shown to be extremely useful when exploring the effect of the shape in front of the strength and the stiffness of vertebrate bone structures. Thus, the quasi-homothetic concept is a new and interesting proposal to be used in plane elasticity models of biological, and specifically of vertebrate, structures which can be modelled as two-dimensional finite element models.
CitationMarcé-Nogué, J., DeMiguel, D., Fortuny, J., Esteban-Trivigno, S., Gil, L. Quasi-homothetic transformation for comparing the mechanical performance of planar models in biological research. "Palaeontologia electronica", Novembre 2013, vol. 16, núm. 3, p. 1-15.
URIhttp://hdl.handle.net/2117/86642
ISSN1935-3952
Publisher versionhttp://palaeo-electronica.org/content/2013/468-quasihomothetic-transformation
Collections
Share: