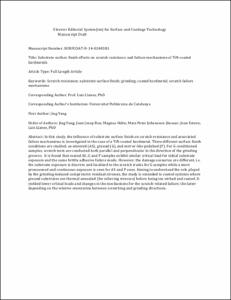 Tipus de documentArticle
EditorElsevier
Condicions d'accésAccés obert
Abstract
In this study, the influence of substrate surface finish on scratch resistance and associated failure mechanisms is investigated in the case of a TiN-coated hardmetal. Three different surface finish conditions are studied: as-sintered (AS), ground (G), and mirror-like polished (P). For G conditioned samples, scratch tests are conducted both parallel and perpendicular to the direction of the grinding grooves. It is found that coated AS, G and P samples exhibit similar critical load for initial substrate exposure and the same brittle adhesive failure mode. However, the damage scenarios are different, i.e. the substrate exposure is discrete and localized to the scratch tracks for G samples while a more pronounced and continuous exposure is seen for AS and P ones. Aiming to understand the role played by the grinding-induced compressive residual stresses, the study is extended to coated systems where ground substrates are thermal annealed (for relieving stresses) before being ion etched and coated. It yielded lower critical loads and changes in the mechanisms for the scratch-related failure; the latter depending on the relative orientation between scratching and grinding directions.
CitacióYang, J., Roa, J.J., Oden, M., Johansson, M., Esteve, J., Llanes, L. Substrate surface finish effects on scratch resistance and failure mechanisms of TiN-coated hardmetals. "Surface and coatings technology", 15 Març 2015, vol. 265, p. 174-184.
URIhttp://hdl.handle.net/2117/86628
DOI10.1016/j.surfcoat.2015.01.038
ISSN0257-8972
Versió de l'editorhttp://www.sciencedirect.com/science/article/pii/S0257897215000729
Col·leccions
Comparteix: