How can holonomy corrections be introduced in f(R) gravity? 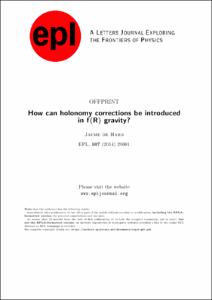 Document typeArticle
Rights accessOpen Access
Abstract
We study the introduction of holonomy corrections in f(R) gravity. We will show that there are infinitely many ways, as many as canonical transformations, to introduce this kind of corrections, depending on the canonical variables (two coordinates and its conjugate momenta) used to obtain the Hamiltonian. In each case, these corrections lead, at effective level, to different modified holonomy-corrected Friedmann equations in f(R) gravity, which are in practice analytically unworkable, i.e. only numerical analysis can be used to understand its dynamics. In fact, there are infinitely many quantum theories, as many as canonical transformations, leading to different quantum cosmologies. Then, the problem is to know which of these quantum theories apply correctly to our Universe. We do not have an answer to this problem, and we could only give the following argument in favour of one preferred set of variables: the one that conformally maps f(R) to Einstein gravity, because for these variables the Hamiltonian of the system has the same form as in standard Loop Quantum Cosmology, which provides a map between the dynamics obtained in holonomy-corrected f(R) gravity and the one of standard Loop Quantum Cosmology. © CopyrightEPLA, 2014.
CitationHaro, J. How can holonomy corrections be introduced in f(R) gravity?. "Europhysics letters", 08 Juliol 2014, vol. 107, núm. 2.
URIhttp://hdl.handle.net/2117/86623
DOI10.1209/0295-5075/107/29001
ISSN0295-5075
Publisher versionhttp://iopscience.iop.org/0295-5075/107/2/29001/
Collections
Share: