Forecasting the northern African dust outbreak towards Europe in April 2011: a model intercomparison 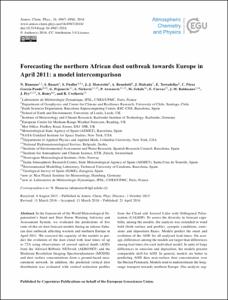 In the framework of theWorld Meteorological Organisation’s Sand and Dust Storm Warning Advisory and Assessment System, we evaluated the predictions of five state-of-the-art dust forecast models during an intense Saharan dust outbreak affecting western and northern Europe in April 2011. We assessed the capacity of the models to predict the evolution of the dust cloud with lead times of up to 72 h using observations of aerosol optical depth (AOD) from the AErosol RObotic NETwork (AERONET) and the Moderate Resolution Imaging Spectroradiometer (MODIS) and dust surface concentrations from a ground-based measurement network. In addition, the predicted vertical dust distribution was evaluated with vertical extinction profiles from the Cloud and Aerosol Lidar with Orthogonal Polarization (CALIOP). To assess the diversity in forecast capability among the models, the analysis was extended to wind field (both surface and profile), synoptic conditions, emissions and deposition fluxes. Models predict the onset and evolution of the AOD for all analysed lead times. On average, differences among the models are larger than differences among lead times for each individual model. In spite of large differences in emission and deposition, the models present comparable skill for AOD. In general, models are better in predicting AOD than near-surface dust concentration over the Iberian Peninsula. Models tend to underestimate the longrange transport towards northern Europe. Our analysis suggests that this is partly due to difficulties in simulating the vertical distribution dust and horizontal wind. Differences in the size distribution and wet scavenging efficiency may also account for model diversity in long-range transport.
CitationHuneeus, N., Basart, S., Baldasano, J. Forecasting the northern African dust outbreak towards Europe in April 2011: a model intercomparison. "Atmospheric chemistry and physics", 21 Abril 2016, vol. 8, núm. 16, p. 4967-4986.
URIhttp://hdl.handle.net/2117/86592
DOI10.5194/acp-16-4967-2016
ISSN1680-7316
Publisher versionhttp://www.atmos-chem-phys.net/16/4967/2016/