A FEM-DEM technique for studying the motion of particles in non-Newtonian fluids: application to the transport of drill cuttings in wellbores 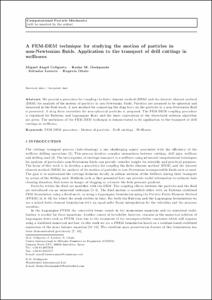 Document typeArticle
PublisherSpringer
Rights accessOpen Access
All rights reserved. This work is protected by the corresponding intellectual and industrial property rights. Without prejudice to any existing legal exemptions, reproduction, distribution, public communication or transformation of this work are prohibited without permission of the copyright holder
Abstract
We present a procedure for coupling the finite element method (FEM) and the discrete element method (DEM) for analysis of the motion of particles in non-Newtonian fluids. Particles are assumed to be spherical and immersed in the fluid mesh. A new method for computing the drag force on the particles in a non-Newtonian fluid is presented. A drag force correction for non-spherical particles is proposed. The FEM-DEM coupling procedure is explained for Eulerian and Lagrangian flows, and the basic expressions of the discretized solution algorithm are given. The usefulness of the FEM-DEM technique is demonstrated in its application to the transport of drill cuttings in wellbores.
CitationCeligueta, M.A., Deshpande, K.M., Latorre, S., Oñate, E. A FEM-DEM technique for studying the motion of particles in non-Newtonian fluids: application to the transport of drill cuttings in wellbores. "Computational particle mechanics", Novembre 2015, vol. 3, núm. 2, p. 263-276.
URIhttp://hdl.handle.net/2117/86562
DOI10.1007/s40571-015-0090-3
ISSN2196-4378
Publisher versionhttp://link.springer.com/article/10.1007/s40571-015-0090-3
Collections
Share: