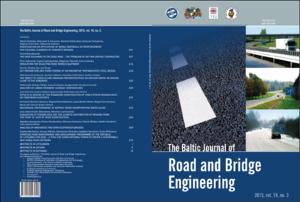 Document typeArticle
Rights accessOpen Access
Abstract
Cable-stayed bridges can be rarely built on a single construction stage and staggered construction is commonly used. The effects of this staggered construction are not only economical as they might also play an important role in the structural behaviour in service. Despite of this importance, these effects are rarely included into the definition of the structural response in service. In order to fill this gap, this paper deals with the effects in service of the staggered erection of steel cable-stayed bridges built on temporary supports. To do so, a criterion based on the minimization of the bending energy in terms of stay forces is applied to several cable-stayed bridges. This study shows the importance of the existence of the pylon-deck connection as well as the number and location of both construction joints and temporary supports during staggered erection.
CitationLozano-Galant, J.A., Paya-Zaforteza, I., Turmo, J. Effects in service of the staggered construction of cable-stayed bridges built on temporary supports. "Baltic journal of road and bridge engineering", Gener 2015, vol. 10, núm. 3, p. 247-254.
URIhttp://hdl.handle.net/2117/86550
DOI10.3846/bjrbe.2015.31
ISSN1822-427X
Publisher versionhttp://jml2012.indexcopernicus.com/abstract.php?icid=1171156
Collections
Share: