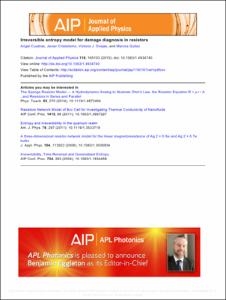 Document typeArticle
PublisherAmerican Institute of Physics (AIP)
Rights accessOpen Access
Abstract
We propose a method to characterize electrical resistor damage based on entropy measurements. Irreversible entropy and the rate at which it is generated are more convenient parameters than resistance for describing damage because they are essentially positive in virtue of the second law of thermodynamics, whereas resistance may increase or decrease depending on the degradation mechanism. Commercial resistors were tested in order to characterize the damage induced by power surges. Resistors were biased with constant and pulsed voltage signals, leading to power dissipation in the range of 4–8 W, which is well above the 0.25W nominal power to initiate failure. Entropy was inferred from the added power and temperature evolution. A model is proposed to understand the relationship among resistance, entropy, and damage. The power surge dissipates into heat (Joule effect) and damages the resistor. The results show a correlation between entropy generation rate and resistor failure. We conclude that damage can be conveniently assessed from irreversible entropy generation. Our results for resistors can be easily extrapolated to other systems or machines that can be modeled based on their resistance
CitationCuadras, A., Crisóstomo, J., Ovejas, V.J., Quilez, M. Irreversible entropy model for damage diagnosis in resistors. "Journal of applied physics", 28 Octubre 2015, vol. 118.
URIhttp://hdl.handle.net/2117/86549
DOI10.1063/1.4934740
ISSN0021-8979
Publisher versionhttp://dx.doi.org/10.1063/1.4934740
Collections
Share: