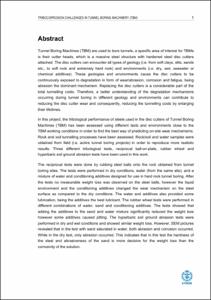 Document typeMaster thesis (pre-Bologna period)
Rights accessOpen Access
Abstract
Tunnel Boring Machines (TBM) are used to bore tunnels, a specific area of interest for TBMs is their cutter heads, which is a massive steel structure with hardened steel disc cutters attached. The disc cutters can encounter all types of geology (i.e. from soft clays, slits, sands etc., to soft rock and extremely hard rock) and environments (i.e. dry, wet, seawater or chemical additives). These geologies and environments cause the disc cutters to be continuously exposed to degradation in form of wear/abrasion, corrosion and fatigue, being abrasion the dominant mechanism. Replacing the disc cutters is a considerable part of the total tunnelling costs. Therefore, a better understanding of the degradation mechanisms occurring during tunnel boring in different geology and environments can contribute to reducing the disc cutter wear and consequently, reducing the tunnelling costs by enlarging their lifetimes. In this project, the tribological performance of steels used in the disc cutters of Tunnel Boring Machines (TBM) has been assessed using different tests and environments close to the TBM working conditions in order to find the best way of predicting on-site wear mechanisms. Rock and soil tunnelling processes have been assessed. Rock/soil and water samples were obtained from field (i.e. active tunnel boring projects) in order to reproduce more realistic results. Three different tribological tests, reciprocal ball-on-plate, rubber wheel and hyperbaric soil ground abrasion tests have been used in this work. The reciprocal tests were done by rubbing steel balls onto the rock obtained from tunnel boring sites. The tests were performed in dry conditions, water (from the same site), and a mixture of water and conditioning additives designed for use in hard rock tunnel boring. After the tests no measurable weight loss was observed on the steel balls, however the liquid environment and the conditioning additives changed the wear mechanism on the steel surface as compared to the dry conditions. The water and additives also provided some lubrication, being the additives the best lubricant. The rubber wheel tests were performed in different combinations of water, sand and conditioning additives. The tests showed that adding the additives to the sand and water mixture significantly reduced the weight loss however some additives caused pitting. The hyperbaric soil ground abrasion tests were performed in dry and wet conditions and showed similar weight loss. However, SEM pictures revealed that in the test with sand saturated in water, both abrasion and corrosion occurred. While in the dry test, only abrasion occurred. This indicates that in this test the hardness of the steel and abrasiveness of the sand is more decisive for the weight loss than the corrosivity of the solution.
SubjectsSteel -- Corrosion, Drilling and boring -- Materials, Acer -- Corrosió, Tuneladores -- Materials
URIhttp://hdl.handle.net/2117/86506
Collections
Share: