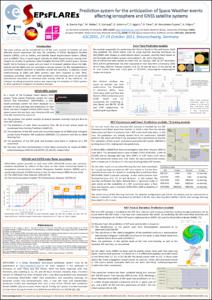 The solar activity can be considered one of the main sources of hazards not only affecting launch operations but also the reliability of Global Navigation Satellite Systems (GNSS), such as Galileo, and Satellite Based Augmentation Systems (SBAS), such as EGNOS. Thus, it could impact critically on GNSS-based services, among other impacts on society. In particular, Solar Energetic Particle (SEP) events pose a serious health risk to humans in space and can result in increased radiation doses for high-latitude aircraft flights and can constitute a serious concern for the microelectronics and other hardware elements of satellites, aircraft and launchers. In addition, severe malfunctioning of GNSS and SBAS systems have been reported as well. In this way, nowadays, it shall become a priority to provide GNSS users with predictions and/or warning alerts on potential disturbances associated to increased solar activity. For instance, such predictions or early warnings could allow significant mitigation of the risk of radiation damage by preventive actions and improve of the reliability of GNSS systems. In this context, the web-based SEPsFLAREs prototype system has been recently deployed to serve as a provider of early warnings and predictions of solar flares and Solar Energetic Particle (SEP) events. The system covers the pre-flare, post-flare/pre-SEP, and intra-SEP scenarios by means of: (1) prediction of solar flares occurrence from 48- to 6-hour ahead based on Automated Solar Activity Prediction (ASAP), (2) prediction of the SEP onset and occurrence based on UMASEP predictor and the so-called Warning Tool, and, finally, (3) prediction of the SEP peak and duration once there is evidence of a SEP occurrence. Regarding the performance of the flare predictor, it has been evaluated considering a dataset from January, 2014 to May, 2014 (with a training period of 32 years). It has been found that the 24-hour forecast horizon provides the best performance, with a Probability of Detection (POD), a False Alarm Ratio (FAR) and True Skill Statistics (TSS) estimations of 63.8%, 99.0% and 0.5 respectively for predicting X-class flares; and of 88.7%, 87.0% and 0.59 respectively, for predicting M-class flares. Regarding the SEP occurrence and onset prediction, it has been validated taking into account all 129 SEP events from January, 1994 to June, 2014. Then, a POD of 86.82%, a FAR of 25.83%, and an Average Warning Time (AWT) of 3.93 h have been obtained. Regarding the evaluation of the Warning Tool, the best performance has led to a POD of 58.3%, a FAR of 90.1%, and an AWT of 23.1 h. Regarding the SEP flux intensity and duration prediction, taking into account the same input dataset, a Mean Absolute Error (MAE) of SEP peak time predictions of 11.3 h has been obtained, a MAE of peak intensity predictions of 0.53 in log10 units of pfu, and a MAE of SEP end time predictions of 28.8 h. In addition, SEPsFLAREs system provides as well, from ESA’s MONITOR server, two real-time products on solar flares nowcasting based on ionospheric monitorization by Global Navigation Satellite Systems (GNSS) and a world-wide network of GNSS receivers from the International GNSS Service (IGS): (1) the GNSS Solar Flare Detector (GSFLAD) and (2) the Sunlit Ionosphere Sudden TEC Enhancement Detector (SISTED), both developed by authors of this work.
CitationGarcia-Rigo, A., Nuñez, M., Qahwaji, R., Ashamari, O. W., Jiggens, P., Pérez, G., Hernandez, M., Hilgers, A. Prediction system for the anticipation of Space Weather events affecting ionosphere and GNSS satellite systems. A: International Colloquium Scientific and Fundamental Aspects of the Galileo Programme. "5th International Colloquium Scientific and Fundamental Aspects of the Galileo Programme, 27-29 October 2015, Braunschweig, Germany". Braunschweig: European Space Agency (ESA), 2015, p. 1.
URIhttp://hdl.handle.net/2117/86493
Publisher versionhttp://congrexprojects.com/2015-events/15a08/proceedings