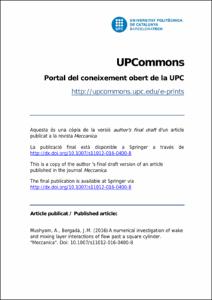 The aim of the present study is to simulate and analyze the interaction of two dimensional flow past a square cylinder in a laminar regime with an upstream mixing layer developed by an axis symmetrical horizontal splitter plate. The mixing layer is generated upstream of the square cylinder by mixing two uniform streams of fluid with different velocities above and below the splitter plate. A range of upstream domain lengths, distances between the splitter plate and the square cylinder, and upstream velocity ratios between the two streams of fluid are analyzed. Unconfined flow over a square cylinder placed in uniform upstream flow is initially analyzed as it plays a crucial role in understanding the properties of the wake. The results are compared with the existing literature to validate the code developed and they are found to be in very good agreement. It is observed from the present study that at smaller velocity ratios, the vortices shed into the wake consist of both clockwise and anticlockwise moment vortices. As velocity ratio is increased only clockwise moment vortices are shed downstream and anticlockwise vortices are shed as Kelvin–Helmholtz instabilities. In all simulations undertaken the same phenomena is observed independent of the upstream Reynolds number, indicating that velocity ratio is a primary parameter influencing the flow. Different instability modes were observed and they were highly dependent on the upstream velocity ratio.