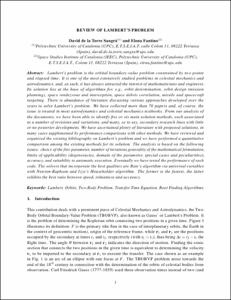 Document typeConference lecture
Rights accessOpen Access
Abstract
Lambert’s problem is the orbital boundary-value problem constrained by two points and elapsed time. It is one of the most extensively studied problems in celestial mechanics and astrodynamics, and, as such, it has always attracted the interest of mathematicians and engineers. Its solution lies at the base of algorithms for, e.g., orbit determination, orbit design (mission planning), space rendezvous and interception, space debris correlation, missile and spacecraft targeting. There is abundance of literature discussing various approaches developed over the years to solve Lambert’s problem. We have collected more than 70 papers and, of course, the issue is treated in most astrodynamics and celestial mechanics textbooks. From our analysis of the documents, we have been able to identify five or six main solution methods, each associated to a number of revisions and variations, and many, so to say, secondary research lines with little or no posterior development. We have ascertained plenty of literature with proposed solutions, in many cases supplemented by performance comparisons with other methods. We have reviewed and organized the existing bibliography on Lambert’s problem and we have performed a quantitative comparison among the existing methods for its solution. The analysis is based on the following issues: choice of the free parameter, number of iterations,generality of the mathematical formulation, limits of applicability (degeneracies, domain of the parameter, special cases and peculiarities), accuracy, and suitability to automatic execution. Eventually we have tested the performance of each code. The solvers that incorporate the best qualities are Bate’s algorithm via universal variables with Newton-Raphson and Izzo’s Householder algorithm. The former is the fastest, the latter exhibits the best ratio between speed, robustness and accuracy.
CitationDe La Torre, D., Fantino, E. Review of Lambert's problem. A: International Symposium on Space Flight Dynamics. "ISSFD 2015: 25th International Symposium on Space Flight Dynamics, 19-23 October, Munich, Germany". Munich: 2015, p. 1-15.
URIhttp://hdl.handle.net/2117/86429
Publisher versionhttp://issfd.org/2015/files/downloads/papers/028_Sangra.pdf
Collections
Share: