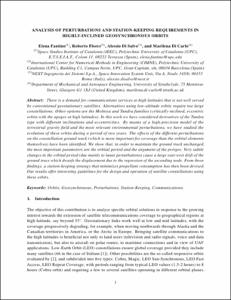 There is a demand for communications services at high latitudes that is not well served by conventional geostationary satellites. Alternatives using low-altitude orbits require too large constellations. Other options are the Molniya and Tundra families (critically-inclined, eccentric orbits with the apogee at high latitudes). In this work we have considered derivatives of the Tundra type with different inclinations and eccentricities. By means of a high-precision model of the terrestrial gravity field and the most relevant environmental perturbations, we have studied the evolution of these orbits during a period of two years. The effects of the different perturbations on the constellation ground track (which is more important for coverage than the orbital elements themselves) have been identified. We show that, in order to maintain the ground track unchanged, the most important parameters are the orbital period and the argument of the perigee. Very subtle changes in the orbital period (due mainly to lunar perturbations) cause a large east-west drift of the ground trace which dwarfs the displacement due to the regression of the ascending node. From these findings, a station-keeping strategy that minimizes propellant consumption has then been devised. Our results offer interesting guidelines for the design and operation of satellite constellations using these orbits.
CitationFantino, E., Flores, R., Di Salvo, A., Di Carlo, M. Analysis of perturbations and station-keeping requirements in highly-inclined geosynchronous orbits. A: International Symposium on Space Flight Dynamics. "ISSFD 2015: 25th International Symposium on Space Flight Dynamics, 19-23 October, Munich, Germany". Munich: 2015, p. 1-13.
URIhttp://hdl.handle.net/2117/86428
Publisher versionhttp://issfd.org/2015/files/downloads/papers/045_Fantino.pdf