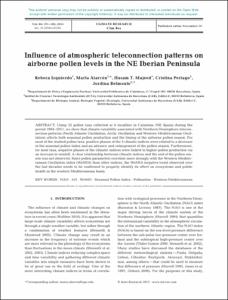 Belmonte Soler, Jordina
Document typeArticle
Rights accessOpen Access
Abstract
Using 22 pollen taxa collected at 6 localities in Catalonia (NE Spain) during the period 1994-2011, we show that climate variability associated with Northern Hemisphere teleconnection patterns (North Atlantic Oscillation, Arctic Oscillation and Western Mediterranean Oscillation) affects both seasonal pollen production and the timing of the airborne pollen season. For most of the studied pollen taxa, positive phases of the 3 climatic indices were related to a decrease in the seasonal pollen index and an advance and enlargement of the pollen season. Furthermore, for most taxa, negative phases of the climatic indices were linked to higher pollen production via an increase in rainfall. A clear relationship between climatic indices and the end of the pollen season was not observed. Since pollen parameters correlate more strongly with the Western Mediterranean Oscillation index (WeMOi) than other indices, the WeMOi negative trend observed over the last decades needs to be confirmed to properly identify its effect on ecosystems and public health in the western Mediterranean basin.
CitationIzquierdo, R., Alarcon, M., Majeed, H.T., Periago, M.C., Belmonte, J. Influence of the climate variability on the airborne pollen levels recorded in Catalonia (NW Mediterranean). "Climate research", 10 Novembre 2015, vol. 66, p. 171-183.
URIhttp://hdl.handle.net/2117/86418
DOI10.3354/cr01341
ISSN0936-577X
Collections
Share: