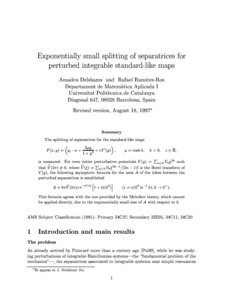 We consider fast quasiperiodic perturbations with two frequencies $(1/\varepsilon,\gamma/\varepsilon)$ of a pendulum, where $\gamma$ is the golden mean number. The complete system has a two-dimensional invariant torus in a neighbourhood of the saddle point. We study the splitting of the three-dimensional invariant manifolds associated to this torus. Provided that the perturbation amplitude is small enough with respect to $\varepsilon $, and some of its Fourier coefficients (the ones associated to Fibonacci numbers), are separated from zero, it is proved that the invariant manifolds split and that the value of the splitting, which turns out to be exponentially small with respect to $\varepsilon $, is correctly predicted by the Melnikov function.
URIhttp://hdl.handle.net/2117/864