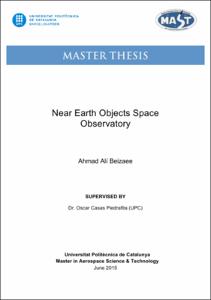 Document typeMaster thesis
Rights accessOpen Access
Abstract
In this Master Thesis we begin with an introduction about Near Earth Objects (NEOs). We start with the different kind of existing NEOs, and then we will focus more on which ones can represent the biggest hazard for Earth. Thus many studies suggest irrelevant number of meteorites hit the earth each year, but actually is very hard to know number of exact hit to Earth, but for introducing some meteors are caused by pea-sized of rock, for good estimated number of meteorites per year is necessary to carefully monitoring the meteorites per day in one area and finally extrapolate this data for all area of Earth, or find meteorites fall in to the dry regions and estimate for all area of Earth some valor. However, is so hard to find exact value because of different size ranges and all procedures have errors, but the estimate value of the mass of material that falls on Earth each year rang from 37000-78000 tons [23]. Most of this mass would come from dust particles. A study done in 1996 calculated that for objects in the 10 grams to 1 kilograms size range 2900-7300 kilograms per year hit Earth, furthermore, between 36 and 166 meteorites larger than 10 grams fall to Earth per million square kilometers per year. Thus that translates to 18000 to 84000 meteorites bigger than 10 grams falls to Earth. Nowadays different space agencies of several countries have their programs to detect hazardous NEOs, but in case of many of this agencies they need extra help from amateurs astronomers. Furthermore, all of this programs represent different disadvantages such as high cost of operation, no centralized data base and work with people that are amateurs and no depending to any agencies. New systems will be proposed to detect on time, the hazardous NEOs. These new systems are an answer for the actual issues to detect NEOs on time, and issues of the main official agencies to resolve their problems with this kind of the space objects. The system where is proposed here is a system based on the constellation of the satellites in the Low Earth Orbit (LEO), equipped with a Newtonian Telescope on board. Furthermore, this system had a ground stations and centralized database, thus that all information about NEOs compiled by satellites can be used for the space agencies to detect on time hazardous NEOs. The Satellites use low cost components and they are respectable to the environment, the function of the satellites will be determined during this thesis, although the LEO present some conditions, like drag, and depending the mass of the satellites, the orbit can be free after several orbits, when the satellites burn because of contact with drag. For design and simulation of the system we use required some specific tools like Solidworks for the 3D design and Moon2.0 for the orbital simulation, and finally we propose an alternative system to put our satellites in the orbit, with a system called QuickFast.
SubjectsComets, Asteroides
URIhttp://hdl.handle.net/2117/86362
Collections
Share: