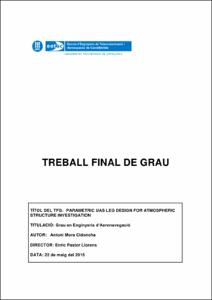 Tornadoes are one of the most devastating atmospheric phenomena worldwide. Only in the EEUU, there are more than 1400 tornadoes yearly. Despite the great effort trying to understand and predict the behavior and path of the tornadoes, the truth is that there not exists an accurate model yet. For more than 50 years, it has been summarized the importance of a certain zone of the tornadoes, the Rear-Flank Downdraft (RFD), on tornado genesis and intensification. This zone is well documented, but its dynamic role it is not understood yet. Recently, some experiments has sent RC Unmanned Aircraft (UA) to sample this zone. The research group Icarus has developed an UAS (Unmanned Aircraft System) defined by a sort of services which cooperate together so as the FMS (Flight Management System) being able to fly using a basic waypoint guidance. The whole system and missions have been developed by using reconfigurable parameters that allow dynamic parametrical scans. That is, instead of specifying the complete trajectory of the mission, it is just need to define some parameters. The motivation of this final project degree has been, taking advantage of the possibilities of the parametrical scans of the Icarus research group UAS bring us, to design a new scan type to do a research on RFD environment. This way, enabling the UAS to fly wisely through this part of the tornadoes with the goal of developing a sample strategy to collect the maximum possible in situ data, regarding both the RFD characteristics as well as possible more generic atmospheric applications. Starting from some hypothesis about the needs on this new kind of scans, the Curved Scan has been developed. There has been a parameter discussion and its refinements so as to obtain a robust algorithm. In addition, due to the importance of the quickness of this missions, the sort of traces and how they are linked to each other, a new turn type has been developed -as well as an extension for further applications-. Finally, it has been implemented inside the simulation environment, with particular examples, and it has been shown the applicability of this new scan type in the surveillance with UAS of the volcanic plumes.
SubjectsAtmospheric turbulence, Tornados
URIhttp://hdl.handle.net/2117/86358