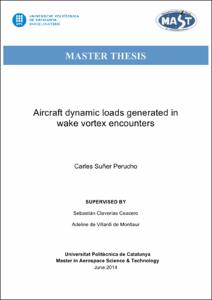 ; Claverías Ceacero, Sebastián
CovenanteeAirbus Defence and Space
Document typeMaster thesis
Rights accessOpen Access
All rights reserved. This work is protected by the corresponding intellectual and industrial property rights. Without prejudice to any existing legal exemptions, reproduction, distribution, public communication or transformation of this work are prohibited without permission of the copyright holder
Abstract
The study illustrated in these pages was developed in the Structural Dynamics and Aeroelasticity Department of the Military Aircraft division of Airbus Defence and Space in Getafe, Madrid (Spain). That department is a multidisciplinary one involving several categories. Some of its competences are the analysis of impacts, acoustics and vibrations for the aircraft and all their systems. Also, the dynamic response of the aircraft to different events is part of the tasks for that department. It is in that field where this project is located. Wake vortex encounters are a dynamic phenomenon similar to other excitations faced by aircraft in its usual operation. That excitation will induce dynamic loads in the aircraft structures as it passes through the wake. Obtaining and analyzing those loads are the main aims of this study. First, it is important to introduce the concept of aircraft wake. In order to achieve the goals of the study, it is necessary to start with the basics of the problem. This is the acknowledgement of the physics of aircraft wakes and how they are generated. Then, how those wakes act as an excitation for other aircraft as they perturb the velocity field of the air. Once the aircraft wakes are introduced, the next step consists of explaining the corresponding aircraft that will face those encounters. In this case, the particular aircraft is an Airbus A400M because that was the one used by Airbus Defence and Space in the campaign of the wake vortex encounters. The following considerations involve the procedures of the Structural Dynamics department in the computation of the numerical simulation for that kind of event. Therefore, it is necessary to know what the tools available for the resolution of this problem are and which aspects face each one. Furthermore, the software and models used in this study have been validated with flight tests and they are an excellent representation of the aircraft and problem considered. After the presentation of the problem, the aircraft considered and tools used, the wake model is the next aspect of study. This is one of the widest fields of aircraft wakes. Having a good wake model is necessary for the accuracy of the results and the main tasks are focused on the wake aging model. That is how the wake evolves and changes as times goes by. With all that, the last aspect of this study is the computation of the dynamic loads induced in wake vortex encounters. As it is an event that is not considered in aircraft regulations, it was difficult to define a particular scenario that is representative of the problem. For that reason, a stochastic analysis of the problem has been chosen to obtain the aircraft loads generated in this kind of event. This analysis consists of scattering the input variables affecting the problem and executing a high number of simulations. In that way, it is possible to derive a statistical behavior of the load response and establish a probability of occurrence for the results obtained. Finally, comparing those results with the reference loads of the aircraft, it is feasible to predict whether wake vortex encounters could be a significant event for the aircraft structure during its operational life.
SubjectsAircraft industry, Aeronàutica -- Indústria
URIhttp://hdl.handle.net/2117/86353
Collections
Share: