Design of a FMS to support four-dimensional trajectories 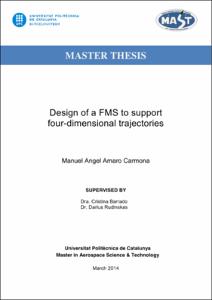 ; Rudinskas, Darius
CovenanteeAntano Gustaičio aviacijos institutas
Document typeMaster thesis
Rights accessOpen Access
Abstract
The increase of air traffic rates registered in the recent years and the forecast for the next twenty years, has encouraged the necessity of developing new alternatives to manage the airspace. For this reason, several European and American organizations have been studying the idea of introducing new Air Traffic Management (ATM) systems based on four-dimensional trajectories. The four-dimensional trajectory management consists in establishing far in advance a time-based sequence for all aircraft converging to a specific point. The main idea is providing each aircraft with a time constraint to get a specific merging point. As a result, it is allowed to the aircraft to perform autonomous flight in order to achieve this merging point in the required time. In case the aircraft is not able to arrive to the merging point at the required time, it is assigned a new time of arrival; this means the aircraft has to perform Holding Patterns (HP) procedures, which is traduced to more fuel consumed, more emissions produced and several issues related to airlines and airport delays. A new generation of avionics systems related to navigation and flight management is emerging in order to support precision trajectories based on waypoints composed by latitude, longitude, altitude and a fourth dimension represented by the time. The purpose of this project is to design, simulate and test the functions of a Flight Management System (FMS) in order to follow automatically four-dimensional trajectories. This is achieved by controlling the aircraft airspeed, altitude, heading and vertical speed in order to arrive to the merging point in the specified time. The system receives data from the aircraft and computes new control parameters based on mathematical equations and prediction trajectories algorithms. Additional features has been added to the FMS-4D, such as the capability of predicting the arrival time taking into account previous flight parameters and speed/altitude constrains. Finally, a testing phase is performed using a flight simulator in order to obtain the performance and results of the designed system.
SubjectsAirlines, Trafic aeri
URIhttp://hdl.handle.net/2117/86342
Collections
Share: