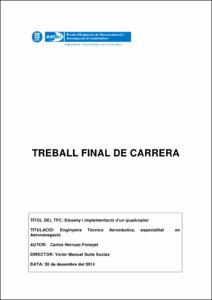 Document typeBachelor thesis
Rights accessOpen Access
Abstract
The purpose of this project is to design a drone capable of stabilizing autonomously, and its later implementation. First different controllers have been studied in order to decide which of them was the most appropriate for the device; the communication of the selected controller with a remote control station has been analyzed; a chassis where to put on all items of the drone has been chosen; and engines able to make the device fly have been selected. It has been necessary to adapt the power source system because the engine voltage input is higher than the one of the controller and the communication system on board. So it has been designed a buck converter. Subsequently, it has been studied what sensors were needed for the application, and how to treat the data obtained to obtain better estimates of the position of the device. To check the sensor an experiment has been done. It consisted on placing the drone in positions in where the direction was known to determine the accuracy of the measurements. At the same time, flight dynamics of devices with the described characteristics has been studied, and a proportional derivative control system has been proposed. With this control system, the user can control the orientation and the height of the device. While the implementation of control orientation worked, it has not been possible to implement height control because the barometer failed to work properly. Finally, wireless communication range has been checked. The drone has been implemented. However, it is unable to take off properly. It seems to be powerful enough to do it, but the control system does not keep the device horizontal enough for the flight to be controllable.
SubjectsDrone aircraft, Avions no tripulats
URIhttp://hdl.handle.net/2117/86340
Collections
Share: