CPDLC digital communication implementation between an ATC and RPAS 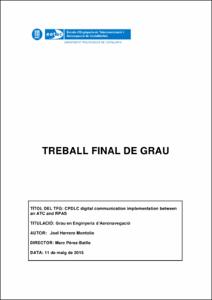 This project has been developed with the principal aim of simulating CPDLC(Controller-Pilot Data Link Communications) between ATC (Air Traffic Controller) and RPAS (Remote Piloted Aircraft Systems). Communication between ATC and conventional aircraft is possible too. The uprising number of users in airspace compels the aerial communications to reinvent themselves for not collapsing the assigned frequency band. As a solution it is proposed CPDLC communications, an application that allows the direct exchange of text-based messages between a controller and a pilot. The most direct benefits in utilization of CPDLC are: 1) Air traffic management is more efficient. 2) Increase of airspace capacity. 3) Communication, surveillance and route conformance monitoring improvement. 4) Voice channel congestion reduction. The CPDLC code developed is integrated with ATM(Air Traffic Management) simulation program "eDEP", provided by Eurocontrol and it is also integrated with Icarus group research simulations. The project is divided in two main parts: a) Encoding library messages. It has been done the effort of collecting all the possible messages that can be exchanged between ATC and pilot. Messages have been encoded to byte level and it has been prepared to be sent through the net. b) Program graphic development. It has been developed a friendly and understandable graphical environment to be able to interact with a computer for sending the messages in a correct way. As a long term objective, it is expected that CPDLC program can be evaluated by real air traffic controllers in ATM simulations where RPAS and conventional aviation is mixed in non-segregated airspace. TFG will be useful for extracting conclusions about benefits provided by CPDLC and to know the real workload that CPDLC system provides to the air traffic controller.
SubjectsAir traffic control, Simuladors de vol -- Programes d'ordinador
URIhttp://hdl.handle.net/2117/86334