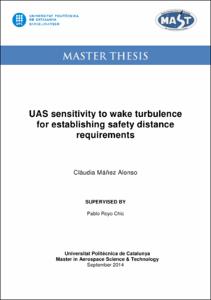 Document typeMaster thesis
Rights accessOpen Access
Abstract
Nowadays, the aviation industry is one of the most important sectors in our society with a great variety of aircraft. Its development and evolution has brought the appearance of new aircraft and, consequently, an increase in the number of aircraft operations in both air and on the ground. Increasing the number of activities in both Air Traffic Management (ATM) and Air Traffic Flow Management (ATFM) has also led to a greater use of the airspace capacity. What it means is that the capacity has been optimized in order to perform more aircraft operations per minute without taking into account the aerial rules and regulations already established. One of the consequences of the optimization of the airspace capacity was the closer approximation between aircraft, that is to say, a reduction of the distance between the leading and the following aircraft. The approximation, which was carried out without taking into account any law, led to some really dangerous situations between aircraft due to the appearance of an effect on the following aircraft, called turbulences or shaking effects, which had never experienced before and which led them to be crashed. Thus, scientists established an uncertainty area, called Wake Turbulence, which should be avoided by all aircraft flying behind another aircraft in order to prevent such dangerous situations. Consequently, the aim of this thesis is to understand what a wake turbulence is and to establish safety distances requirements between aircraft. On the one side, what it is going to be studied is what a wake turbulence is, including its properties and characteristics, for a better understanding of what it is. On the other side, a type of modeling of the wake turbulence done previously is going to be studied in order to know how much the wake turbulence descends and moves and, once it is done, a new modeling of the wake turbulence is going to be performed basing on previous studies. In addition to it, another simulation is going to be performed in order to see some collision scenarios between aircraft where the wake turbulence is involved. And, finally, once it is done, the minimal safety distance that UAS will have to maintain respect to other aircraft may be estimated.
SubjectsTurbulences, Turbulència -- Simulació numèrica
URIhttp://hdl.handle.net/2117/86332
Collections
Share: