Decomposition of geometric constraint graphs based on computing fundamental circuits 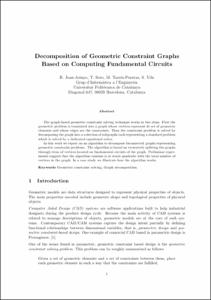 Document typeExternal research report
Rights accessOpen Access
Abstract
The graph-based geometric constraint solving technique works in two steps. First the geometric problem is translated into a graph whose vertices represent de set of geometric elements and whose edges are the constraints. Then the constraint problem is solved by decomposing the graph into a colection of subgraphs each representing a standard problem which is solved by a dedicated equational solver. In this work we report on an algorithm to decompose biconnected graphs representing geometric constraint problems. The algorithm is based on recursively splitting the graphs through terns of vertices located on fundamental circuits of the graph. Preliminar experiments suggest that the algorithm runtime is at worst quadratic with the total number of vertices in the graph. In a case study we illustrate how the algorithm works.
CitationJoan-Arinyo, R., Soto-Riera, A., Tarrés, M., Vila-Marta, S. "Decomposition of geometric constraint graphs based on computing fundamental circuits". 2007.
Is part ofLSI-07-31-R
URIhttp://hdl.handle.net/2117/86309
Collections
Share: