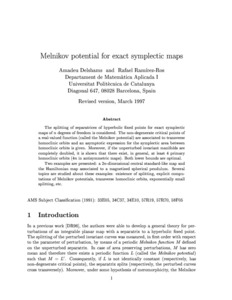 The splitting of separatrices of hyperbolic fixed points for exact symplectic maps of $n$ degrees of freedom is considered. The non-degenerate critical points of a real-valued function (called the Melnikov potential) are associated to transverse homoclinic orbits and an asymptotic expression for the symplectic area between homoclinic orbits is given. Moreover, if the unperturbed invariant manifolds are completely doubled, it is shown that there exist, in general, at least $4$ primary homoclinic orbits ($4n$ in antisymmetric maps). Both lower bounds are optimal. Two examples are presented: a $2n$-dimensional central standard-like map and the Hamiltonian map associated to a magnetized spherical pendulum. Several topics are studied about these examples: existence of splitting, explicit computations of Melnikov potentials, transverse homoclinic orbits, exponentially small splitting, etc.
URIhttp://hdl.handle.net/2117/863