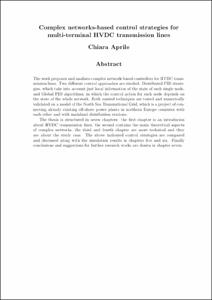 Except where otherwise noted, content on this work is licensed under a Creative Commons license : Attribution-NonCommercial-NoDerivs 3.0 Spain
Abstract
The work proposes and analizes complex network-based controllers for HVDC transmission lines. Two different control approaches are studied: Distributed PID strategies, which take into account just local information of the state of each single node, and Global PID algorithms, in which the control action for each node depends on the state of the whole network. Both control techniques are tested and numerically validated on a model of the North Sea Transnational Grid, which is a project of connecting already existing off-shore power plants in northern Europe countries with each other and with mainland distribution stations. The thesis is structured in seven chapters: the first chapter is an introducion about HVDC transmission lines, the second contains the main theoretical aspects of complex networks, the third and fourth chapter are more technical and they are about the study case. The above indicated control strategies are compared and discussed along with the simulation results in chapters five and six. Finally conclusions and suggestions for further research works are drawn in chapter seven.
SubjectsPID controllers, Offshore wind power plants, Electric power transmission, Controladors PID, Parcs eòlics marins, Energia elèctrica -- Transmissió
DegreeMOBILITAT INCOMING
URIhttp://hdl.handle.net/2117/86297
Collections
Share: