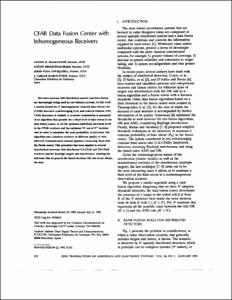 Document typeArticle
Rights accessOpen Access
Abstract
Detection systems with distributed sensors and data fusion are increasingly used by surveillance systems. A system formed by N inhomogeneous constant false alarm rate (CFAR) detectors (cell-averaging (CA) and ordered statistic (OS) CFAR detectors) is studied. A recursive formulation of an algorithm that permits a fixed level of false alarms in the data fusion center is presented, to set the optimum individual threshold levels in the CFAR receivers and the optimum `K out of N' decision rule in order to maximize the total probability of detection. The algorithm also considers receivers of different quality or with different communication channel qualities connecting them with the fusion center. This procedure has been applied to several hypothetical networks with distributed CA-CFAR and OS-CFAR receivers and for Rayleigh targets and interference, and it was seen that in general the fusion decision OR rule is not always the best
CitationElias, A., Broquetas, A. CFAR data fusion center with inhomogeneous receivers. "IEEE transactions on aerospace and electronic systems", Gener 1992, vol. 28, núm. 1, p. 276-285.
URIhttp://hdl.handle.net/2117/86278
DOI10.1109/7.135453
ISSN0018-9251
Publisher versionhttp://ieeexplore.ieee.org/stamp/stamp.jsp?tp=&arnumber=135453
Collections
Share: